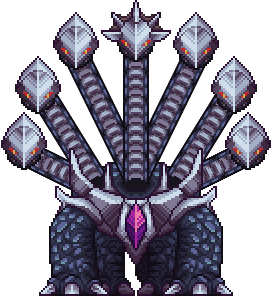 Yamata is a post-Moon Lord Ancient Boss fought at night in The Mire biome within the Lake of the Rising Moon. He is a counterpart to Akuma.

Yamata does not spawn on his own and requires the player to summon him using a Dread Moon Sigil in The Mire during the Night.

Yamata is a central body with 7 protruding heads. His main body takes no damage from any attacks - however, one of his heads is his true head, and that head has lower defense and shares a health bar with the body. If the player go too far from Yamata, he will teleport near them.

Yamata before battling and in both his phases features many quotes, alarming the player of his attacks or are simply for dialogue. 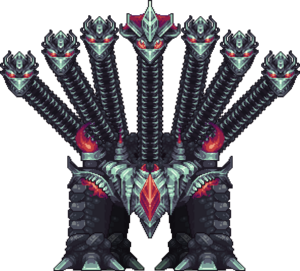 Yamata no Orochi is the awakened form of Yamata, and is much more powerful than his normal form. This form can only be battled in Expert Mode.

Yamata no Orochi appears after Yamata is defeated, or can be summoned using a Dread Moon Rune in The Mire during the Night.

Once defeated, a bit of dialogue will appear, after that, Yamata will awaken in his true, abyssal form. Instead of Abyssal Gravity, the player will be inflicted with the True Abyssal Gravity debuff, which cripples flight even more.

At the start of the fight, Yamata will summon Haruka to his side. Haruka remains invincible for the whole fight, occasionally appearing and charging at players to do damage.

Yamata in this form is much larger than before, and positions his heads farther away from the player to rain down attacks from multiple directions. He alternates between the following attacks at random.

When transitioning to its awakened phase[edit | edit source]

This dialogue sequence always happens prior to Yamata's Awakening.