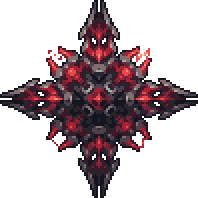 Zer0 is a post-Moon Lord, Ancient-tier Boss fought in The Void.

Zer0 is initially found as a dormant Strange Machine in The Void. It can be found at any point in the game, but cannot be interacted with in any way.

Once the player has the means to do so, using the Doomsday Tesseract in The Void will activate the Strange Machine, which turns into Zer0. If Zer0 has already been defeated, it will simply summon Zer0.

Zer0 acts like a sentry, with its weapons circling around it. As long as Zer0 has active weapons, its main body will be protected by an invincible shield.

Zero Protocol is an Expert Mode exclusive second form of Zero. It has an entirely different AI from its non-expert phase, so extreme caution is advised.