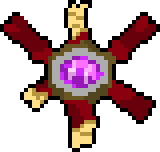 Ancient Desert Discus is the second boss of the Azercadmium Mod, they're pretty easy but a bit strong so it is recommended to have Silver/Tungsten Armor and buffs ready.

Around the middle of the Old Era on Zylon, the Ancient Desert Discus was created to scan planets for minerals (before the ZME was made). It was sent out from Zylon, and began its search for planets full of minerals, along with weaker versions of itself just called Discuses. Some were more suited to fighting and were called Sandgrain Assault Discuses. Unlike its less successful prototype, the Ancient Desert Discus (back then called the Discus Captain) had a machine learning artificial intelligence, allowing it to increase in skill overtime and make its own decisions. After many, many light years, it stumbled across the planet Terraria. It began to orbit around the planet for a few days, analyzing its surplus of minerals. It noticed that Terraria also had an abundance of life. It began descent into the planet’s atmosphere along with its minions. It landed in the desert and into an antlion cave. It noticed the antlions (which were weak compared to it), and realized the beauty of life. It realized that destroying other worlds for the Zylonian’s own gain was wrong, and It shut down all of its signals, but the Zylonians had already learned of the thriving planet. It vowed to protect the planet from any threat, and shut down its sensors and entered a deep sleep. Its minions noticed the player, and the player’s capability of destroying the planet. But the tougher discuses and their captain stayed in sleep mode, because they spent most of their lifetimes in sleep (which only the weak minions were built for doing) and were very rusted and weak. After the player used an item made from the weaker discuses, the signal sent was enough to end the Ancient Desert Discus’s sleep. Since the Ancient Desert Discus was very weak and near the end of its lifetime, it was easily defeated by the player. Radias saw the Ancient Desert Discus’s good intentions and blessed it with power, and sent its loyal portal to assist the Discus Captain in trying to defeat the player one last time.

Ancient Desert Discus does not spawn on it's own, and must be summoned with a Suspicious Looking Disc in the Desert at Night.

While Ancient Desert Discus is alive, his theme will play in the background: