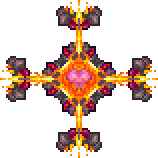 Heartcore is a semi-rematch with Starcore with 150000 health. It is summoned using a Passion Rune at night. It is currently the temporary final boss of the mod.

Heartcore won't spawn on its own and must be summoned by the player via a Passion Rune.

Heartcore hovers around the player and fires a barrage of projectiles towards the player. Heartcore is a very projectile heavy fight, but it is also very slow, much slower than Starcore in fact.

In Expert Mode, upon defeat, Heartcore will break away from its molten prison and unleash its true power as Fury Soul. 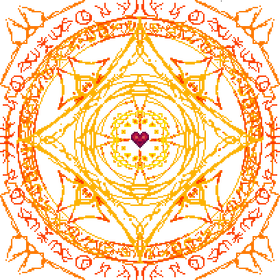 Fury Soul is the [Expert Mode]-exclusive 2nd phase of Heartcore with 150,000 health. It is summoned by defeating Heartcore in expert mode. It is currently the temporary true final boss of the mod.

Fury Soul won't spawn on its own and must be summoned by the player via defeating Heartcore in expert mode.