From Terraria Mods Wiki
Jump to: navigation, search
The Crag 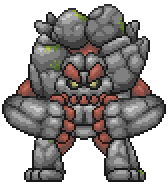 The Crag is a pre-Hardmode boss that can be summoned at the Earthen Shrine. He can be summoned fairly early in the game and can provide the player with powerful early game equipment.

The Crag does not spawn on his own, and must be summoned at the Earthen Shrine using the Earthen Totem.

The Crag will generally stand in place, slamming the ground which causes shockwaves to form on either side of it. The shockwaves launch small rocks into the air. He can also hurl a larger boulder toward the player which bounces several times before exploding into smaller rocks. Occasionally, he will leap into the air toward the player. When landing, he causes boulders to fall from the ceiling. If the player is out of line of sight for too long, the Crag will disassemble himself, turning into damaging boulder projectiles that reassemble near the player's location.

At half health, The Crag will perform his attacks three times in a row instead of once.

In expert mode, The Crag's boulders become Boulder Kin, the boulders caused by his leaping can cause the stoned debuff, and his shockwaves travel further.