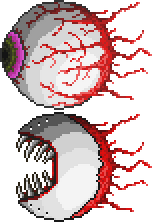 Oblivion is a Superhardmode Boss and the final boss in Exxo Avalon.

Oblivion does not spawn on its own, and must be summoned with the Eye of Oblivion at Night.

The first phase of Oblivion is similar to the Eye of Cthulhu in appearance. However, it will fire occasional dark matter fireballs at the player(s) in the eye phase. It will also ocassionally spawn World Feeders to it's aid. When this phase gets to 1/3 HP, it will spin and turn into an eye-mouth, also similar to the Eye of Cthulhu. It will then spew dark matter flamethrowers at the player(s). Instead of World Feeders, it will now spawn Mechanical Diggers instead. Once this phase is dead, it drops to the ground and is undamageable. After 5 seconds, it will switch to its second form.

"Oblivion has been reborn!"