Gilgamesh and Enkidu are Post-SA-X bosses. They are summoned by using an Excalipoor anywhere. The boss fight consists of two phases.

Gilgamesh is accompanied by his sidekick Enkidu to pursue the player.

Gilgamesh moves and leaps through tiles to pursue the player. He dashes forward & thrusts a naginata attempting to poke the player or will simply use it when the player is within melee range, he may also throw 2 tomahawks at the player.

When Gilgamesh's health drops to zero, he transforms into his second phase. 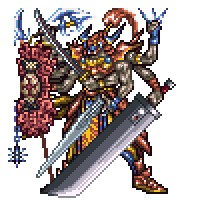