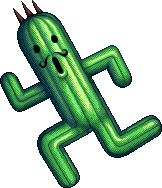 The Jumbo Cactuar, also known as the Gigantuar, is the first post-Moon Lord boss added by the Joostmod. It is summoned by using a Mustachioed Cactus in the desert.

The Jumbo Cactuar runs toward the player while firing needle volleys. Each cluster deals 10 damage and ignores defense and invincibility frames. It may also leap into the air in an act to stomp on the player using its massive hitbox.

After about 25 seconds have passed, the Jumbo Cactuar will begin to charge its most powerful attack: 10000 Needles. It shakes with its arms crossed before unleashing a large extended barrage of needles. While charging, the Jumbo Cactuar's defense increases up to as high as 285. The 10000 needles can easily kill players; it is best to utilize the Rod of Discord, Portal Gun, or Teleporters to avoid this attack.

The Jumbo Cactuar will enrage if the player leaves the desert for too long. A message will appear in the chat when this happens. Its attack damage doubles as it spins rapidly towards the player.

In Expert Mode: The Jumbo Cactuar gains two new attacks where it could summon 30 Cactuars around the player, which are stronger after the Moon Lord has been defeated, or three Giant Needles. The Giant Needles will fly above or below the player while spinning, until they stop to point and charge at the player. Keep moving to avoid getting hit.