The SA-X (Samus Aran-X) is a post-Jumbo Cactuar boss added by the Joostmod. It is summoned by using an Infected Arm Cannon anywhere. The boss consists of three phases.

The SA-X approaches the player while firing ice beams at them. These beams inflict the Chilled, Frostburn and Frozen debuffs on-hit. The SA-X can charge these shots to deal more damage. It can also fire Super Missiles, often as a follow up to freezing the player. In Expert Mode, Super Missiles will remove the player's flight time. Lastly, the SA-X will occasionally morph into a ball and lay a Power Bomb.

If the target player goes too far away, SA-X will continuously space jump towards them. While space jumping, the SA-X takes 50% less damage from all weapons and cannot receive critical hits. 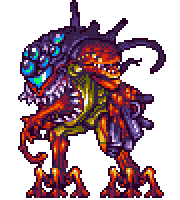 In its mutated form, the SA-X can throw a dash punch, jump to create shockwaves upon landing, fire a barrage of missiles and spit acid at the player.

The Acid Spit attack is short-ranged and spits 8 globs of acid. The acid globs splash into droplets that deal half damage. Both of projectiles inflict the Poisoned and Oozed debuffs.

When far from the player, the SA-X will prioritize using the Dash Punch or Jumping. In Expert Mode, the Mutated SA-X's missiles and melee strikes disable the player's flight abilities until they land.

The SA-X in its "true form" flies directly towards the player. The core periodically opens its 'eye' to fire charged ice beams that inflict Frostburn, Chilled, and Frozen. It will occasionally spin and fire uncharged ice beams in all directions. It may also summon a random X Parasite.