FOR YOU MY PEOPLE I WILL TAKE FLIGHT, SO THE SUN CAN RISE AGAIN

The Sunlight Trader is a Pre-Hardmode Boss fought after Skeletron in the Desert Town of Eitd. 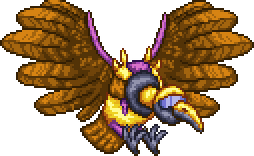 The Sunlight Trader and his mount cannot spawn on their own and only can be summoned with a Sunswept Egg in the Desert Town of Eitd.

When the mount is alive, the Sunlight Trader is immune to damage, and follows after the player while throwing spears, and sending discs that follows the player for a bit until they disappear.

The Mount attacks with the following:

At 50% health The Sunlight Trader will empower his spear and bow causing thrown spears to glow orange, deal more damage and inflict On Fire! while his bow will occasionally fire slowing moving sand balls along with his normal arrows.