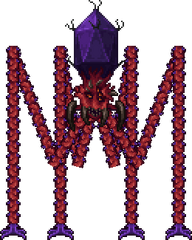 The Esophage is a Hardmode boss, intended to be fought after the mechanical bosses alongside Plantera.

The Esophage does not spawn on its own, and requires the player to summon it by using a Fleshy Capsid. It can only be summoned in the Corruption or Crimson.

Esophage pursues the player fairly slowly at first, speeding up and becoming more aggressive as its health lowers. At high health, it is unable to pursue the player without tiles to walk on, but at lower health it gains a degree of ability to pursue them through the air, albeit erratically.

Esophage alternates randomly between four attacks (never repeating the same attack twice in a row), some of which are made more difficult in Expert Mode: