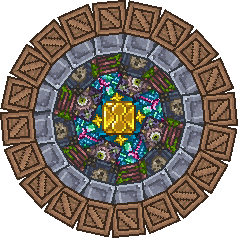 Not to be confused with Cratrogeddon, a Post-Moon Lord boss

Greed huh? That alone is what powered that thing? I guess the desire for a quick buck matters more than our lives...

Cratrosity is a Hardmode Boss, which can be summoned as soon as Hardmode begins, but is not recommended to fight until about Post-Plantera. It resembles an amalgamate of various crates which constantly changes shape and fires coins.

Additionally, upon death, it unlocks the ability to purchase a Sword of a Thousand Truths from Draken, and once the player has 5000 total accumulated Expertise.

Cratrosity can be summoned by right-clicking a Terraria Co Supply Crate in your inventory, with a

Key of Night, or

Key of Light also in your inventory. It can only be summoned at night.

Shadow Key in your inventory may interfere with spawning Cratrosity.

This section is missing some information. You can help by expanding it

Cratrosity's core is a Golden Crate, which is the only part of the boss which depletes its main health when damaged.

It has 6 phases, advancing 1 phase each time it "dies," with each phase spanning 1/6th of its total hp. When it advances a phase, it restores to full health again, sheds a layer of crates, which turn into Servants of Microtransactions and attack the player. Killing these Servants causes them to drop crates.