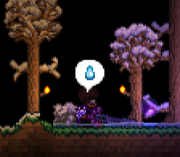 Emotes are a new system in Terraria Overhaul. The Emote Wheel can be brought up using the Qkey by default, similarly to the Quick Action wheel. When the wheel is brought up, simply click on the emote you wish to use, and it will appear over the player's head.

There is a total of default 35 emotes, with all of them coming from the King Arthur's Gold videogame.

If patron verification has been completed (i.e. "Thankies <3" message replaces the patreon link in Main Menu's top left corner), custom emotes can be added by placing .png images that are not bigger than 32 pixels in both directions into the CustomEmotes folder. The location of which depends on the OS:

Note from a developer:

It's planned to allow non-patrons to use custom emotes too, but with a limit.