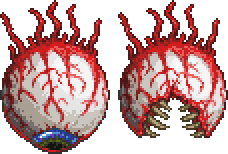 This is a page about an overhaul of a vanilla boss. The page on that boss itself can be found here.

The Eye of Cthulhu is a Pre-Hardmode boss. This is one of the first bosses a player encounters, as it spawns automatically when a relatively early level of game advancement is achieved. It can also be summoned manually by using the Suspicious Looking Eye at night. It can be considered the second easiest boss in the game (the first being King Slime), though can still present a challenge to newer players.

While the Eye of Cthulhu is alive, a remix of Boss 1, Kirbyrocket - Boss 1 (Redux) will play, unless disabled.

The Eye of Cthulhu starts spinning and screaming violently, until it explodes into a bunch of gore.