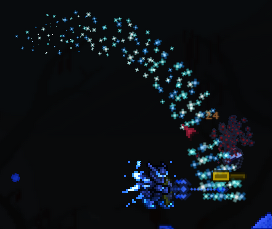 Trailing particles left by the blade.

The Immaterial Blade is an alternate version of the Phaseblade. It attacks slower and has less knockback, but has a base 60 Armor Penetration. It also emits a bright trail of light while it's being swung.

Its best modifier is Legendary.